Usually when we think about marketing, we think about how to reach potential customers in a way that will attract them to our business with the intent of driving sales.

While marketing is primarily thought of through the lens of sales and growing revenues, it really can be so much more. At the core, marketing is all about communications.

One of the greatest strokes of genius when it comes to marketing is found in the best job ad example ever written. This just goes to show that marketing isn’t always an outside job.

A lesser acknowledged form of marketing is what many refer to as internal marketing. That is, marketing to our employees.

Internal marketing strengthens employee relations and builds culture. It also comes heavily into play when we endeavor to grow our business through people and hiring new employees.

When we think about successful marketing, it’s not fully centered on gaining new customers. At some point, we’re going to need to fulfill those orders for the customers we secured through sales marketing, and to do this, we need to have a reliable team of employees working in the back end.

One of the most important components of building your company is growing and nurturing satisfaction and synergy in your team. This requires strong cohesion and resonance with company culture.

As you enter into a recruitment phase, be careful not to confuse the best people with the right people. The person that is the most qualified for the position you’re trying to fill may not be the right fit for your company and your team.

To establish if someone is the right fit, you first need to sell them on your company culture.

One of the greatest obstacles to effective recruitment is that every job ad tends to sound the same: progressive, fun, family-oriented, with no downside. The reality is that most jobs don’t live up to this pretentious advertising.

For this reason, I’ve named this job ad written by Ernest Shackleton as the best job ad example ever written.

Ernest Shackleton was the British explorer who wanted to be the first to traverse the Antarctic in the early 1900s. He had set sail in 1914 with 28 men when disaster struck.

The group became shipwrecked and stranded in Antarctica. At that time, there were no satellite phones or GPS units, so they truly were stranded.

Assumed dead, three years later the group surprised England when they re-emerged with 28 men. They had not lost a single person.

I attribute this sensational outcome to Shackleton’s recruiting process in putting together his team, and it started with his job advertisement. In his ad, Shackleton speaks very frankly about the adventurous opportunity he is offering. 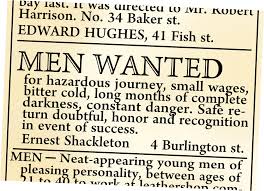 Now, who would apply for an ad like that?

The right people. That’s who.

The type of people who applied to an ad like that were probably not the best sailors, but they were the right sailors for Shackleton. They may not have had all the top technical abilities, but they had the right stuff for the job, they fit the culture, they fit what he needed.

They were the right fit because Shackleton was brutally honest in his job description.

By dousing your own job advertisements with this level of honesty, you may not attract the most technically talented people, but you will attract the right people. You may not attract large numbers of applicants, and that’s the goal. By advertising a job this way, your goal is to polarize your audience, strongly attracting the right people while equally strongly deterring the wrong kind of people.

So many of us are scared to talk about the downsides of the job, but by emphasizing all the positives and failing to address the negatives, you are creating an unrealistic expectation in any potential applicants. This will result in new hires coming into the job unprepared for what the work and culture actually entails.

Every job has good days and bad days. Sell them on the good days, but also be brutally honest about the bad days.

Most of us love certain challenges, so a potential employee that actively pursues challenges that resemble your job’s “bad days” will be drawn to the negative aspects of the position as much as the positive. This person will likely be the right fit for the job.

But then, like in all of our ads, we added a dose of reality. In fact, a few paragraphs in, I explicitly stated that this job is NOT for everyone and went on to emphasize that it will be demanding and very challenging at times, sharing specifics where it makes sense.

From there, I list the key elements of the position: interacting with prospects daily both on the phone and online, constant change, and the need to consistently wear many hats.

I then discourage anyone that cannot readily embrace these key elements from applying.

One thing I like to do before creating a job ad is to talk to the employees currently working in the position or in a similar position. I ask them to name the best and worst things they would have liked to had known before starting the job and incorporate the common responses into the recruitment ad.